Special Ascarioja at Fitur 2023 in the newspaper La Rioja 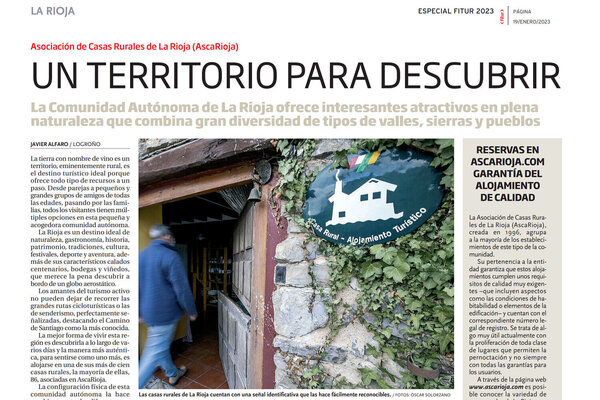 The land with the name of wine is an eminently rural territory, the ideal tourist destination because it offers all kinds of resources within easy reach.From couples to small and large groups of friends of all ages, as well as families, all visitors have multiple options in this small and welcoming autonomous community. La Rioja is an ideal destination for nature, gastronomy, history, heritage, traditions, culture, festivals, sport and adventure, as well as its characteristic centuries-old wine cellars, wineries and vineyards, which are well worth discovering in a hot-air balloon.

Lovers of active tourism should not miss the great cycling and hiking routes, perfectly signposted, with the Camino de Santiago as the best known.The best way to experience this region is to discover it over several days, and the most authentic way to feel like one of the locals is to stay in one of the more than one hundred rural houses, most of them, 86, associated with Ascarioja.

The physical configuration of this autonomous region makes it change from one area to another; to the north, the Ebro Valley, the main axis from west to east, and to the south, the Iberian System, which in turn forms the backbone of the territory, from south to north, through seven valleys: Alhama, Cidacos, Leza-Jubera, Iregua, Najerilla, Oja and Tirón.

Families and nature lovers cannot fail to enjoy the Sierra Cebollera nature reserve or the enclaves of the neighbouring Sierra de Cameros, among which the rocky outcrop of Viguera is particularly noteworthy, or in the Cidacos Valley the El Barranco Perdido paleo-adventure park, themed on prehistory and the dinosaurs that inhabited the region in the past.

Heritage is very present throughout the region, especially Romanesque. In the area of the river Cárdenas, in what is now known as the Valle de la Lengua, there are points of great interest such as the monasteries of Santa María la Real de Nájera, or Yuso and Suso in San Millán de la Cogolla, the birthplace of the Spanish language, not forgetting interesting enclaves such as the monasteries of Valvanera and Cañas, or the 9th century castle of Clavijo.

Any time of year is a good time to discover La Rioja, both for the good weather and for the comfort and cosiness of the rural houses, just a stone's throw from everything.

In addition, rural tourism is vital for the economy of the empty areas and an important driving force to keep the villages alive.Gastronomy is another great attraction. This land has a varied vegetable garden and outstanding typical dishes to taste, as well as several Michelin-starred restaurants.

The Digital Federation of Rural Tourism is born

The La Rioja stand at the international tourism fair (Fitur) is today hosting meetings for the creation and launch of the national Digital Federation of Rural Tourism (Feditur). The Association of Rural Houses of La Rioja (Ascarioja) is "one of the founding entities of the project," said its president, José Joaquín Sanz, days before the start of Fitur.

Feditur was created with the aim of "having a national voice that can defend the interests of rural tourism throughout the territory".

In addition, as this newspaper has learned, it will seek to increase the promotion of rural tourism and facilitate advances in digitisation.As a union of associations that work in favour of rural tourism, it is also "the need to fight against those regulations that create all kinds of confusion", says Sanz.

In this sense, he insists that consumers should "check that when they stay in a rural house, anywhere in Spain, it has a legal registration number". The aim of this recommendation is to avoid unpleasant situations and to guarantee the client that the establishment complies with the law.

The Association of Rural Houses of La Rioja (Ascarioja), created in 1996, brings together most of the establishments of this type in the community.Membership of the organisation guarantees that these lodgings meet very demanding quality requirements - which include aspects such as habitability conditions or building elements - and that they have the corresponding legal registration number. This is very useful nowadays with the proliferation of all kinds of places that allow overnight stays and not always with all the guarantees for users.

Through the website www.ascarioja.com it is possible to find out about the variety of rural houses in La Rioja, their characteristics and the municipalities and areas in which they are located. José Joaquín Sanz, president of Ascarioja, also recommends that "large groups that opt for special dates contact us or send a request well in advance to the houses to ensure availability, because demand tends to be very high".

"If they have more than eight rooms they are not rural houses, they are another type of accommodation that has proliferated thanks to a very ambiguous legislation".